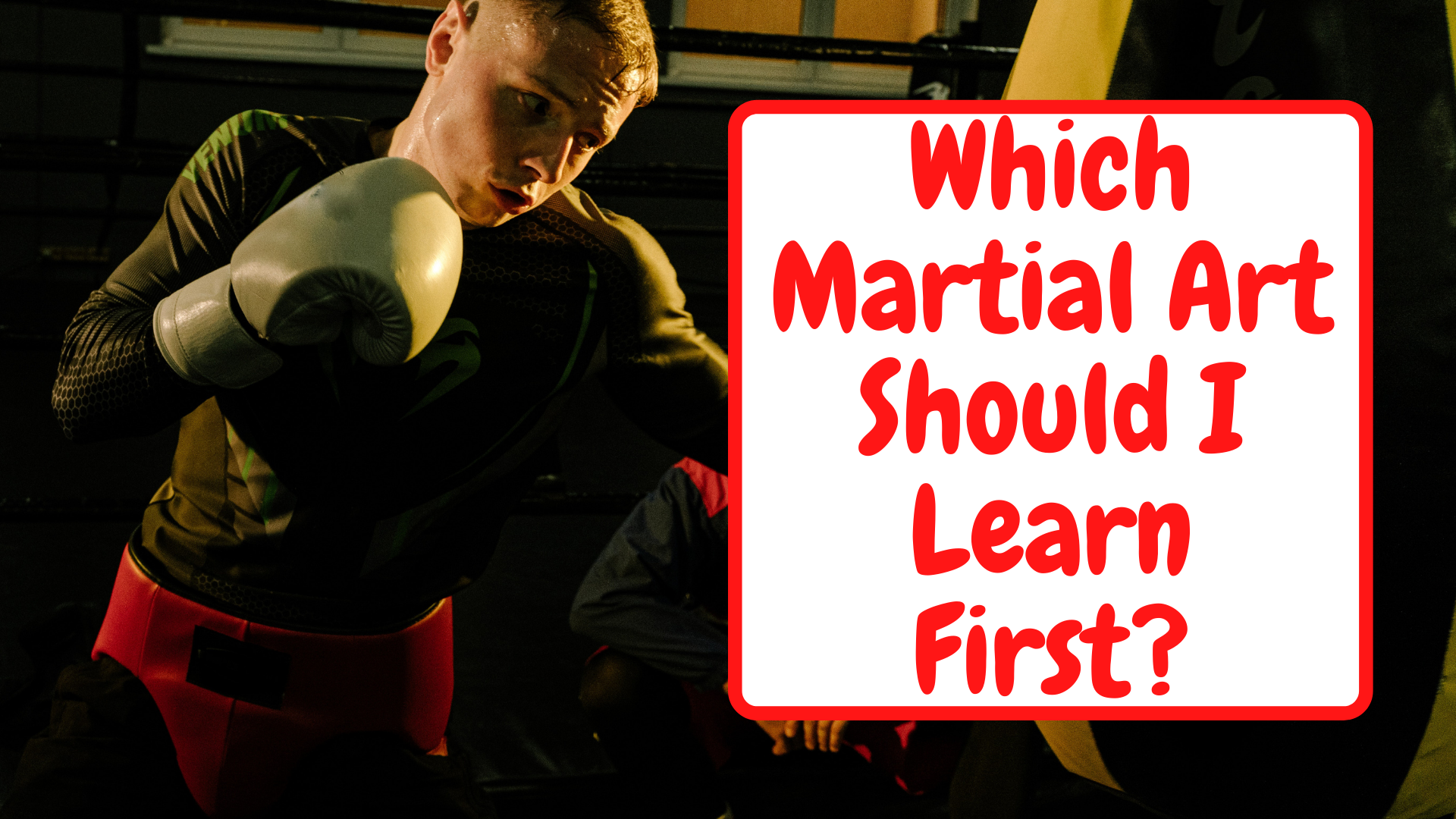 Welcome to my review of which martial art you should learn first as a beginner! (Updated for 2022!)

Life skills are extremely important, especially for younger people who are yet to embark on their life journey. Martial arts is one of the best disciplines for shaping values such as focus, tolerance, fairness, and humbleness. Martial arts does not only teach you how to fight or defend yourself in dangerous situations, it also forms your behavior towards any kinds of situations.

Training martial arts will be one of the most demanding and draining activities that anyone will do in their lives, but training will push people out of their comfort zones and teaches them how to deal with failures and criticism while also improving self-evaluation abilities.

There are a broad selection of martial arts branches, and you might be thinking, what is the best for me? Which martial art should I learn first? Well, this article will definitely help you!

But before we begin, let’s explore first the benefits of martial arts to your health and overall well-being…

Why Do I Have To Take Martial Art Classes?

As mentioned, learning martial arts can provide a lot of benefits, and it includes both your mental and physical health. Some of the benefits are as follows:

Martial Arts, like any other sport, requires tremendous amounts of energy in order to be done. While running and sprinting aren’t that much done here, the vigorous pacing and intensity of martial arts while training or fighting is equally physically demanding.

So as you train, you burn more calories faster. Supposing you are also keen on your calorie intake, then losing weight will be done in no time!

In training, you expose yourself to hard situations and perform at your best. Due to this, you know you can handle anything that comes your way. With each class, you strengthen or “condition” your confidence, making it stronger.

Apart from fitness, there’s a scientific reason why martial arts training boosts your confidence. Regular workouts, for example, increase serotonin levels in the brain. Serotonin is a neurotransmitter that affects your mood and helps you think more clearly.

Training martial arts provides the perfect environment for anyone to foster their discipline. To be able to handle the adversities of routines, practices, and drills in training, a high level of commitment and discipline is needed.

This is the reason why most beginners quit after a few sessions because they think they can’t handle to harsh environment of training. However, if you push through, you will realize that only those who strive to be discipline will advance in their journey in martial arts.

It’s likely that the focus and discipline you developed during training would carry over to your personal life.

Most martial art disciplines require you to be loose and flexible. Flexibility is essential in most martial arts since they demand a lot of rapid movements involving using strength and power.

Executing punches, kicks, rapid movements, and muscular synchronization, without first stretching may result in injury. Flexibility is beneficial for proper posture and reduces the chance of injury.

I think the most apparent reason why a person should learn martial arts is self-defense.

If you want to know which martial art is best for self-defense, then you have to check out this link, and I’ll show some of the best ones you can try.

You may also find my reviews of combat sports gears, equipment, and apparel useful as you begin your training. Some examples include—Best Boxing Gloves for Training, Best MMA and Boxing Shoes for Women, Best MMA Bags, and Best Protein Powder for Fighter, just to name a few.

Or, you can check out the entire list here.

Which Martial Art Should I Learn First?

If you are a beginner in the martial arts world, then here are some of the most practical choices you can train under with.

One of the oldest martial arts, Boxing is still highly regarded as one of the most important combat sports bases. This “sweet science” comes as simple as just throwing your hands to a complex matter of utilizing head movements, footwork, and punches to form a very efficient striking system.

Boxing can also be an incredible workout. The short bursts of energy by punching simulates various muscle groups. This leads to an increase in cardiovascular performance as well as body conditioning.

In terms of efficiency in real life situations, then the self-defense you learn from Boxing is very applicable. You will learn how to evade attacks while also effectively punching, something that not all people can do. Lastly, due to the offensive and defensive skills that you will gain from this, it proves to be one of the best bases for MMA.

Also one of the oldest practiced martial arts, dating back to thousands of years ago, Wrestling is a form of martial arts which requires technique to take an opponent down and maintain a superior position. Wrestlers take advantage of leverage, balance, explosive strength, and knowledge in order to dominate.

The best thing about Wrestling is that it is a full body sport. Meaning, you really need to exercise every part of your body to develop raw strength needed for the constant pushing and pulling you do during wrestling. Also, the cardiovascular endurance that you acquire from training Wrestling is none other like other martial arts.

Muay Thai, also well known as “The Art of Eight Limbs”, is highly touted as the most effective striking art in the whole world. This martial art boasts powerful striking while maximizing efficiency. It encourages using all the weapons that are available in the human body. Meaning, punches, kicks, elbows, and knees, can all be incorporated.

Muay Thai is a simple martial art to learn. In recent decades, even children as young as six years old have become practitioners of this sport. Muay Thai classes can be done by anyone regardless of age, and whether it’s fitness that you are up to.

Take note, Muay Thai has one of the most painful trainings. The immense shin and other bones conditioning will test your toughness. Muay Thai gives practitioners the confidence they need in real-life self-defense scenarios by conditioning their mind, body, and spirit.

When you hear the word martial arts, you can mostly think about Karate because this discipline has been used in countless movie adaptations.  It is a Japanese form of discipline. Its origin is inconclusive, but Okinawa, Japan, is credited as its place of inception.

The beauty about Karate in general, is that the sport encourages self-control, honor, respect, and discipline. Yes, Karate prioritizes self-defense rather than attack but it also trains your strength, flexibility, agility, and technique so you can outmaneuver your opponents.

Karate is an excellent choice for beginners in Martial Arts, especially if you’re aiming self-defense because there will be a lot of blocking techniques that will be taught here. It is also a great form of exercise because it requires the entire body movement.

As the word implies, this martial art originated in Brazil in the 1920s. It was particularly developed by the Gracie brothers that include Gastão Jr., Oswaldo, George, Carlos, and Hélio, and popularized by Royce Gracie as he displayed the beauty of it in the early days of UFC. It is a grappling and ground fighting martial art that focuses on the skill of controlling one’s opponent through techniques that cause them to submit.

“Gentle Art” as this martial art is called, because by properly executing and applying the techniques, even smaller or weaker persons can defend themselves from bigger and stronger guys.

Brazilian Jiu Jitsu in-depth is very complex. Hundreds of techniques and ways can branch of a simple submission move, that’s why it is often compared as the “human” counterpart of chess. Training this martial art will definitely sharpen your mind and build one’s character.

Now, it is for this reason that Brazilian Jiu-Jitsu is a popular self-defense martial art, especially among women. I also believe that this factor makes them excellent for beginners as well.

I hope my review has provided you sufficient information in answering this all-important question – which martial art should I learn first.

But take note that you can’t go wrong with any of the combat sports listed above. And that the bottom line is it would just depend on your style and personal preference.

If you’re not sure about your style or technique, then you may try to enroll in nearby martial art classes if there are any. And then, see if that form of discipline suits you. But of course, you can also try learning various martial arts if you like.

Well, I guess that’s just about it! Thank you for taking time off and reading my “which martial art should I learn first” content.

1 thought on “Which Martial Art Should I Learn First? What Is The Best Base?”